In this time of uncertainty, we wish everyone health and safety.
Biography

I have been the Same from the beginning — and from Birth.

Throughout all the years of My Divine Avataric Work here, I have simply Been in the midst of everyone — Reflecting people to themselves, Blessing and Meditating all in My Own Prior Position.

Incarnation of the Divine

In its ancient meaning, the word "Avatar" describes a human incarnation of the Divine. The Avatar is the One who has "crossed down", from the Divine "place" to the human realm. The appearance of the Avatar is traditionally regarded as a very rare and great blessing.

The Avatar is not born because of past karma, and has not merely attained Spiritual liberation by extraordinary effort — but, rather, is a direct manifestation, in physical form, of the One and Only Divine Reality. 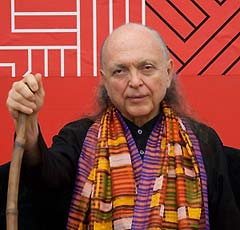 The function of the Avatar is to Awaken human beings to the untouchable Freedom and Love which that One lives and transmits.

The appearance of Avatar Adi Da Samraj here can only be seen as an unprecedented Incarnation of the Radiant Divine Reality.

This is the greatest of mysteries, and something that can only be understood fully by going beyond the usual workings and imaginings of the mind and psyche.

In other words, it is not useful to merely believe or to merely disbelieve anything about the appearance of the Divine Avatar.

For those who find Him, Avatar Adi Da is recognized as the Divine Incarnation at the heart — the root core of feeling and being. This recognition is an undeniable knowing, an indelible intuition that deepens into a direct response to His Revelation.

The Time and Place of Divine Intervention

Early in 1939, a revered Spiritual Master in India, Upasani Baba, made an unusual prophecy — he proclaimed that an Avatar would soon be born in a Western country.

"He will be all-powerful," Upasani declared, "and bear down everything before him. And he will see to it that Vedic Dharma is firmly reestablished..."

Avatar Adi Da was born in New York in November of that year. His name at birth was Franklin Jones.

The time and place of Avatar Adi Da's birth were anything but arbitrary. The Second World War began in 1939. It was a war that resulted not only in the death of tens of millions of people, but also in the moral devastation of the world.

This pivotal crisis in humanity's history was the inevitable time for Avatar Adi Da to be born. The purpose of His birth was twofold: to establish a new Revelation of the living Divine Reality and to transform the potentially dire future that human egos were making more and more likely.

I have My Solemn, Deep, Extraordinary, Unknown Work to do. You must allow Me to Do this Work, in the terror of this "late time", and forever.

The Divine Avatar's intervention is a Spiritual one. And His Avataric Incarnation refers to much more than His bodily human form — it refers to a great Emergence of Divine Conscious Light into this realm.

While His primary Work in the body was to establish a new Way of Divine Realization here, He is always Working Spiritually, on a universal scale, to purify the negative energies, influences, and forces that have patterned (and continue to pattern) world events.

There was yet another factor in the vast constellation of conditions which drew Avatar Adi Da to appear in this time: the birth of global communication and interconnectedness. Only in this time would His Spiritual gifts and influence be able to touch millions, with unprecedented immediacy.

Because the world was becoming Westernized in culture and psyche, it was necessary for Avatar Adi Da's world-Blessing Work that He be born in the Western world and that He fully know the Western mind.

Next: The Birth of the Avatar