In this time of uncertainty, we wish everyone health and safety.
Biography - 5 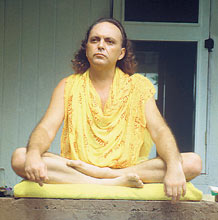 The singular impulse that animated the Divine Avatar's body was the overwhelming movement to Bless and Awaken humankind.

Just as He had experienced crucial moments of transformation in His early Life, previous to His Divine Re-Awakening, the Divine Avatar's Teaching-Work and later Life was also marked by moments of profound change.

These transformative events were shifts in the manner of His Work with others and also in how His physical body showed the signs of His Divine State and Blessing-Force.

These events were also associated with awesome yogic changes — and even shattering, death-like experiences in His body. Mysteriously, however, it was through these great transfiguring events that His Avataric Incarnation was brought to its fullest Demonstration.

The first of these significant transformations took place on January 11, 1986, in an event Avatar Adi Da calls His "Divine Avataric Self-'Emergence'".

Early on that morning, in the midst of speaking with devotees on the telephone, Avatar Adi Da collapsed, apparently unconscious. When devotees reached His side, only the faintest signs of life persisted in His body.

After several minutes, however, life-energy returned to His body quite forcefully. He began weeping and calling out in compassionate love for all beings. Something had changed — in His body and in His manner of Work — as devotees were to see plainly over the coming months.

Very soon after this event, Avatar Adi Da began an extended juice fast and traveled to the United States and Europe. He was calling His devotees to renunciation, or to the realization and fulfillment of all of the gifts of wisdom and practice He had given over the years of His Teaching Work.

During this period, He Blessed His devotees and many others with silent occasions of Sighting Him — and His body was luminous with the Force of His Intention to Bless.

Previously, the Force of the "Bright" had manifested through Him as the intention to embrace and transform those who came to Him. Now, a form of perfectly compassionate Freedom, or "Divine Indifference" — which He described as a kind of universal embrace — began to manifest.

After the great event of 1986, Avatar Adi Da found that it was still necessary to Teach, in order to establish His devotees in the fullest recognition-response to Him, in a process of true renunciation. However, He no longer presumed to Himself enter into a "theater" of engagement with their problems and concerns.

Instead, He Called devotees to the responsibility of devotional practice in response to His "Bright" State, as Revealed via His bodily form. He also began to manifest more and more signs of His Work of Blessing for the sake of the entire world.

The "Brightness" and Ruchira Dham Events

In April 1999, at His Hermitage in Fiji, another important transition began in Avatar Adi Da's Life and Work.

While in seclusion at the "Brightness" — the temple that is now His burial site — Avatar Adi Da began to suffer severe symptoms in His body. He described that it was becoming difficult for Him to maintain the Yogic "descent" necessary for association with the body.

This increasing difficulty was the result of the growing intensity and importance of His Invisible Blessing-Work — the world was careening toward a period of great difficulty and conflict. (The seed essays of His address to "the entire human family", Not-Two Is Peace, were written during this period.)

On April 12, 2000, shortly after Avatar Adi Da traveled to Lopez Island, in the State of Washington, an extreme crisis occurred — the culmination of the process that had begun at the "Brightness".

Avatar Adi Da calls this event the "Ruchira Dham Event" (because the house where He was staying when the crisis occurred is now His renunciate Hermitage named "Ruchira Dham", "the Abode of Brightness".)

Within a couple of hours of His arrival at the house on Lopez Island, Avatar Adi Da Samraj felt great pressure on His chest and was having difficulty breathing. His arms and hands would continually cramp up and convulse. His Bodily discomfort was so strong that He had to be carried to His bed.

To the degree that He could speak, Avatar Adi Da Samraj described a profound Ascent: "I am here. Can you see Me Up Here?" His Divine Light was dissolving the room.

To the devotees attending His body, He was obviously way beyond the apparent "here" where they were.

At the point where He seemed most Ascended, His Face took on an expression of the purest bliss.

Avatar Adi Da came to Reveal the deep mystery of the Ruchira Dham Event over the following eight and a half years of His Life.

In that event, He had actually demonstrated the absolute Outshining of the entire cosmos — what He calls "Divine Translation", the culmination of the process of Divine Enlightenment that He Reveals.

For all others, such Perfect Outshining would coincide with the death of the body. But Avatar Adi Da had miraculously "re-Emerged". He was able to maintain association with the body, even though every fraction of the impulse of the submission that had animated His Life from birth was now vanished.

After the Ruchira Dham Event, Adi Da Samraj was able to describe and confirm the entire Reality-Way of Adidam from direct experience.

His continued Life from that time was simply a mysterious gift — His body became an agent of direct Revelation of His "Bright" Eternal State.

Divine Translation is not a myth.

Divine Translation is not an illusion.

Divine Translation is not a mere and "local" apparition of brain phenomena.

Divine Translation is not an hallucination.

Divine Translation is not a "maybe".

Divine Translation is not a mere "philosophy".

Divine Translation is not merely to be "believed in".

Next: Demonstration of Outshining

The singular impulse that animated His body, His Life and His Work, is the overwhelming movement to Bless and Awaken humankind.