In this time of uncertainty, we wish everyone health and safety.
Biography - 6

A Profound Process Began, Which has Been Unfolding since That Great Event of Yogic Death....

In the years following the Ruchira Dham Event, Avatar Adi Da worked tirelessly to generate the fullness of His Eternal Legacy and gifts to humankind:

Avatar Adi Da Samraj passed from the body in the event of His Divine Mahasamadhi on November 27, 2008. This was the final Completion of His Divine Translation, His Perfect Outshining of the world, which was begun in the Ruchira Dham Event. It signified His "Retirement" into His Eternal Transcendental and Spiritual Divine Form, in which He is forever Present to Bless all.

The Eternal Work of the Divine Avatar 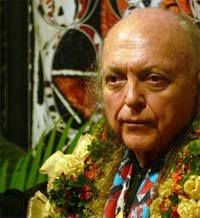 Through all of His physical Lifetime, Avatar Adi Da always only revealed one thing — the Divine Reality Itself, the Infinite Conscious Light and Love-Bliss as the real Condition of all, beyond the turbulence of time and space, suffering and death.

His primary and forever means of making that Divine Revelation known is through His Transcendental Spiritual Silence, His direct Transmission of the Absolute in the living hearts of those who turn to Him.

His world-Blessing Work, Awakening Transmission, and profound Grace continue forever beyond His Lifetime. Via all the forms of Agency Avatar Adi Da established in this world — including His Word, His Art, the recordings and recollections of His Actions, the Sanctuaries and objects He Empowered, as well as the culture of His devotees — Avatar Adi Da penetrates the human heart and every vestige of presumed separateness.

Avatar Adi Da Samraj is the Conscious Light Itself, breaking through the ancient dreams of the mortal human mind, undoing every knot, every doubt, every fear, every shape of unlove in the living being, awakening the heart to the incomprehensible Freedom that is Reality Itself.

He is here in every "here", and present at every "now", offering His gift of Divine Awakening to all who will receive It.

Related: Avatar Adi Da's Mahasamadhi
His Own Words on the Significance of His Passing

A Profound Process Began to Unfold after The Great Event of Yogic Death in 2000.

These were Outer Signs of the Direct Self-Revelation of Avatar Adi Da's Divine Self-Nature, and His Self-Condition, and Self-State.