In this time of uncertainty, we wish everyone health and safety.
Mahasamadhi 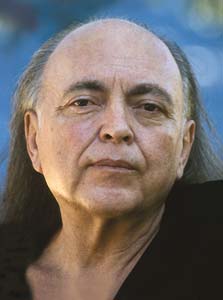 In the early evening of Thursday, November 27, 2008 His Divine Presence, Avatar Adi Da Samraj, Departed from the Body. He was in His Fijian Hermitage, Adi Da Samrajashram (the Island of Naitauba).

His Passing was entirely peaceful and free of any struggle. He Passed of natural causes. At the time of His Passing, He was Working in His Art Studio, surrounded by devotees who were engaged in serving His Artwork.

On November 30, His Body was interred in the most sacred Place of Adidam — the secluded Temple which Avatar Adi Da established in 1993 (at Adi Da Samrajashram) as His burial place.

On the morning of His Passing, He had completed His Writing of The Aletheon, the book which He designated as "first and foremost" among all of His Writings.

Avatar Adi Da worked on The Aletheon intensively for the last two years, bringing all of His most essential Spiritual and philosophical communications into a final form. The Aletheon was published by The Dawn Horse Press in 2009.

His Divine Presence Bequeathed to humankind a Legacy of Inexhaustible Profundity and Limitless Blessing-Power.

Avatar Adi Da's Primary Gift is His own Eternal Transcendental Spiritual Being. The Primary Purpose of His human Lifetime was to Establish the means by which any and all beings could be truly connected to Him and in devotional Communion with Him.

Thus, He Worked with utmost intensity throughout His entire Life to develop and establish His Transcendental Spiritual Way — Adidam, or (more fully) the "Radical" (or Always "At-the-Root") Reality-Way of Adidam Ruchiradam.

Most fundamentally, the Reality-Way of Adidam is the devotional relationship to Avatar Adi Da Samraj as one's Divine Avataric Master. That Way was established and elaborated by Avatar Adi Da in the greatest possible detail during His human Lifetime. Thus, His precise Instruction relative to all aspects of His Way will always guide and align practitioners of His Way, in the process of always deepening Communion with Him.

Avatar Adi Da's literary, philosophical, and practical writings consist of over seventy five published books — including The Knee of Listening, His Spiritual Autobiography, and The Dawn Horse Testament, His magisterial Revelation of the entire Spiritual Process from beginning to end.

His Divine Presence did a tremendous amount of Writing in the years 2005-2008. Just two weeks before His Passing, He designated the five books that He Wrote during that three-year period as "the Five Principal Books of My Forever Comprehensive Seventh-Stage Address to all-and-All":

Transcendental Realism: The Image-Art of egoless Coincidence With Reality Itself

Currently available from The Dawn Horse Press are:

Over a period of many decades, His Divine Presence undertook a massive examination of the world's religious traditions, culminating in an annotated bibliography of approximately 10,000 items, entitled The Basket of Tolerance. A briefer "epitome" version of The Basket of Tolerance is scheduled for publication by The Dawn Horse Press in 2009.

Avatar Adi Da also created original translations of traditional Spiritual texts, translations in which He brings out the deepest meaning of the original texts. The recent publication Reality Is All the God There Is (published by Inner Traditions) presents His translations of texts from the traditions of Buddhism and Advaita Vedanta.

Avatar Adi Da's writings on fundamental practical areas of human life, examined from the Spiritual perspective, include Green Gorilla (published by The Dawn Horse Press), relative to raw diet, and The Complete Yoga of Emotional-Sexual Life (published by Inner Traditions).

Avatar Adi Da's principal literary work is His trilogy entitled The Orpheum. In the late 1990s, poet Robert Lax said of The Mummery Book (the opening volume of the Orpheum trilogy), "Living and working as a writer for many decades, I have not encountered a book like this, that mysteriously and unselfconsciously conveys so much of the Unspeakable Reality."

The Orpheum is also presented in the form of cutting-edge theatre — as shown online at www.mummerybook.org.

In addition to His Writings, Avatar Adi Da gave thousands of hours of recorded Discourse. Many key Discourses have already been published by The Dawn Horse Press on CD and DVD. And many more will be published on an ongoing basis.

Adi Da was a prolific artist, producing a remarkable body of work in different media, most intensively in the years since 2000. He was invited to show His work in a solo exhibition at the 2007 Venice Biennale, and also as part of the 2008 Winter in Florence Festival.

Noted art critic Donald Kuspit has written, "It is Adi Da Samraj's imaginative triumph to have conveyed the illusions created by discrepant points of view and the emotionally liberating effect when they aesthetically unite . . ." Among the publications of Avatar Adi Da's art are The World As Light, Transcendental Realism, and The Spectra Suites. His artistic work can be viewed online at www.adidabiennale.org and www.daplastique.com.

As an expression of His Deep Love for and Constant Blessing of all beings and things in the entirety of the natural world, Avatar Adi Da founded and developed Da Fear-No-More (visit the website).

His Divine Presence created an extensive body of Wisdom about the Spiritual nature of non-human beings, and of the non-human world altogether, for the sake of humans' ongoing understanding, respect, and stewardship of all life. Avatar Adi Da's Vision of Fear-No-More is one wherein human and non-human exist equally, at heart, within one diverse sacred culture.

Another dimension to Avatar Adi Da's far-reaching Legacy is the social wisdom embodied in His book Not-Two Is Peace (published by The Dawn Horse Press).

In that book, He Calls for the establishment of a Global Cooperative Forum that mobilizes "everybody-all-at-once" on the basis of recognizing the prior (or inherent) unity of the entire human family.

He proposes that such a forum is the necessary and effective means for addressing the world's most pressing issues.

"I Will Not Be Gone"

In the following passages from His Essay "I Am The One Who Has Always Been Here", written in 1995, Avatar Adi Da Speaks of His Eternal Transcendental Spiritual Existence, His Everlasting Regard for all beings, and His Constant Blessing-Grace.

I Will Be here Forever.
I Will Be every "where" Forever.

I Cannot Leave, For My Transcendentally Spiritually "Bright" Divine Spherical Self-Domain Is Not Some "Where" To "Go To".
My Divine Self-Domain Is Eternal.
I Am Eternal, and I Am Always Already Merely Present-here, and every "where" In The Cosmic Domain.

My Bodily (Human) Avataric-Incarnation-Form Has Its time, Whereby I connect (or Freedom-"Bind") you (and every one, and all, and All) To Me.

When The Time Of My Divine Avataric Incarnation is Fulfilled, Then I Am "Retired" To My Eternal Form — The Divine-Body-Power Of My Divine Self-State Made Infinitely Intact In The Cosmic Domain (Forever).

I Love you Now.
I Will Love you every "then" and "there".
And I Always Loved you.
That Is How I Got To here (and every "where").

"I Am The One Who Has Always Been Here"

(from the book Aham Da Asmi)

Avatar Adi Da's Own
Word on the Significance
of His Passing