In this time of uncertainty, we wish everyone health and safety.
The Reality-Way of Adidam

The heart has a question.

The heart must be Satisfied.

Without that Satisfaction – Which is necessarily Spiritual in Nature – there is no Real Happiness.

You cannot be sane if you think there is only flesh, only materiality, only grossness.

Such thinking is not fully "natural" enough.

There is "Something" you are not accounting for.

Be open to "Whatever" That Is.

It is not enough to merely go on presuming the materialist disposition.

You must look into this.

Avatar Adi Da gives no secret "methods" or "techniques", such as those that may be found in the spirituality sections of the world's bookstores. The Divine Avatar's Revelation has nothing to do with any form of spiritual seeking whatsoever. 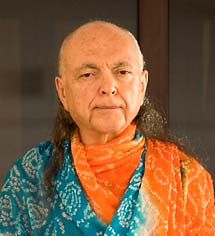 The Reality-Way of Adidam is based in "radical" devotion to Avatar Adi Da Samraj — awakened spontaneously by the recognition that He Is the Incarnate Divine Reality, and the Revealer of the True State of every thing and every one.

Such devotion is called "radical" because this response originates from the very "root" of the being, prior to any presumption of a separate "self". Once devotional turning to Him is established, it becomes a moment to moment Communion that Avatar Adi Da calls the "searchless Beholding" of Him.

Founded in such "radical" devotion to Avatar Adi Da, the devotee is moved to embrace the disciplines of right life. These disciplines are founded in the non-seeking disposition that is revealed through devotional Communion with Avatar Adi Da.

Right life encompasses every aspect of life — including money, food, sex, and social relationships — as well as meditation, worship, and service in cooperation with other devotees.

These disciplines re-pattern all the energies of the total body-mind, which is purified, balanced, and rejuvenated in the equanimity of Communion with Avatar Adi Da Samraj.

Avatar Adi Da Calls His devotee to consider and be established in the "Perfect Knowledge" of Reality Itself.

This is first engaged through a preliminary practice — and, ultimately, via the "Perfect Practice"— of "Perfect Knowledge".

When the devotee is in Communion with Avatar Adi Da, He Reveals that no apparent "object" of attention, no form of "knowledge" about the world, and no "point of view" of any kind is actually True or Real. Rather, Reality Itself is Shown as the Prior and egoless Condition That is Always Already the Case.

Next: You Become What You Meditate On