In this time of uncertainty, we wish everyone health and safety.
Divine Enlightenment

The Super-Physics of
Divine Enlightenment

The Super-Physics of
Divine Enlightenment

from The Ancient Walk-About Way
by Avatar Adi Da Samraj

Divine Self-Realization is absolutely uncommon. In Its Most Perfect Completeness, It has, until My Own Divine Avataric Appearance and Demonstration, never transpired in anyone's case in the entire history of the human world.

It is, rather, a process that belongs to the future "evolution" of humanity — at best, thousands, millions, billions of years in the future, for the human race as a whole.

At present, almost all human beings persist in an infantile developmental moment that has nothing whatsoever to do with the Ultimate Truth. As a general rule, human beings are still dependent, violent, ego-possessed — still seeking consolations in the realm of changes. 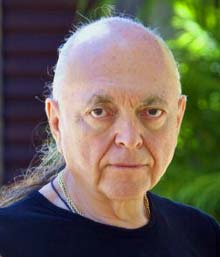 Therefore, do not imagine for a moment that the only-by-Me Revealed and Given Way of Adidam is an easy matter, that you can simply listen to My Teaching-Argument and (thereby) Realize the Divine Self-Condition.

The humanly incarnate Spiritual Master is Divine Help to the advantage of those in like form. When My devotee enters into right relationship with Me, changes happen in the literal physics of one's existence.

That transformative process is enacted in My devotees in (and by Means of) My Divine Avataric Company.

The relationship between the Adept-Realizer and the devotee is not a matter of conceptual symbolisms or emotional attachment to some extraordinary person. The true Guru-devotee relationship is real physics.

Therefore, because human beings can make unique use of the Offering of the Adept-Realizer's Company, it is to the special advantage of people when a Realizer-Guru (of whatever Real degree) appears in their midst. And that advantage is Unique in My Case, because I have Revealed and Given the Complete Process, Which culminates in Most Perfect (or seventh stage) Divine Self-Realization.

Spiritual life has nothing to do with the childishness people tend to dramatize in relationship to the Spiritual Master.

I Criticize that childish (or dependent) approach more directly than most people do. Others are merely petulant about the necessity of the relationship to the Spiritual Master, in the self-righteous mood of adolescence.

Most people are willing to sacrifice things, but not themselves. They are willing to pay cash, in other words, for a quick salvation. Such "religious consumerism" is an ancient ritual of worship, but it is false and futile.

True worship is the surrender of your own body-mind in Truth, in the Living and Transformative Company of the Spiritual Master. People absolutely resist such surrender, because they know nothing about it. Human beings are, in fact, subhuman in their present level of adaptation. Devotional surrender of the egoic self represents a future stage of development for humanity as a species.

In their present actual, literal, psycho-physical condition, human beings are incapable of such surrender. They must be drawn out of that limited condition, and into another state of existence. And it is as far to go from where they are now to Most Ultimate Divine Self-Realization as it is from the amoeba in the primal mud of the Earth to a human being. Every aspect of your existence — even the body — must change dramatically.

There is an unspeakably profound difference between the condition of the usual egoic individual and the Condition of the Divinely Enlightened individual. If imagined in "evolutionary" terms, that difference is an inconceivable leap. However, there is a real process for making that leap, and there is Help for it: the devotional and (in due course) Spiritual relationship to Me, the Divine Siddha-Guru.

In other words, something in the Super-Physics of the universe makes it possible for the Divine Conscious Light to Avatarically Incarnate as an apparent human individual, for the Purpose of Bringing others into the Sphere of Divinely Enlightened Existence.

Next: The Literal Physics of Your Entire Existence Must Change

In this beautiful collection of essays, Avatar Adi Da draws the reader through a "consideration" of the ancient tradition of heart-response to the living Realizer, and of His Unique and All-Completing Appearance in that tradition.

Both the childish approach and the adolescent approach to the Spiritual Master are forms of destructive nonsense and must be overcome.

The relationship between the Adept-Realizer and the devotee is not a matter of conceptual symbolisms or emotional attachment to some extraordinary person.

However, the mature, ego-surrendering relationship to the Spiritual Master is absolutely Lawful and necessary.